The Sanskrit word Chakra literally translates to wheel or disk.

In yoga, meditation, and Ayurveda, this term refers to wheels of energy throughout the body.

There are seven main chakras, which align the spine, starting from the base of the spine through to the crown of the head. Imagine a swirling wheel of energy where matter and consciousness meet. This invisible energy, called Prana, is vital life force, which keeps us vibrant, healthy, and alive.

First Chakra: The Muladhara is the chakra of stability, security, and our basic needs. It encompasses the first three vertebrae, the bladder, and the colon. When this chakra is open, we feel safe and fearless.

Second Chakra: The Svadhisthana chakra is our creativity and sexual center. It is located above the pubic bone, below the navel, and is responsible for our creative expression.

Third Chakra: The Manipura chakra means lustrous gem and it’s the area from the navel to the breastbone. The third chakra is our source of personal power.

The Fourth Chakra: The Connection Between Matter and Spirit

Located at the heart center, the fourth chakra, anahata is at the middle of the seven and unites the lower chakras of matter and the upper chakras of spirit. The fourth is also spiritual but serves as a bridge between our body, mind, emotions, and spirit. The heart chakra is our source of love and connection.

Fifth Chakra: The Vishuddha chakra is the fifth chakra, located in the area of the throat. This is our source of verbal expression and the ability to speak our highest truth. The fifth chakra includes the neck, thyroid, and parathyroid glands, jaw, mouth, and tongue.

Sixth Chakra: The Ajna chakra is located in between the eyebrows. It is also referred to as the “third eye” chakra. Ajna is our center of intuition. We all have a sense of intuition but we may not listen to it or heed its warnings. Focus on opening the sixth chakra will help you hone this ability.

What do Singing Bowls have to do with Chakras…..

In the west we say that the 7 notes of the scale correspond to the 7 chakras.

That means each Singing Bowl would correspond to a specific chakra. When played that sound will help stimulate that chakra and work with it.

Many people want to choose a bowl for the reason of working on a specific chakra. This can be an interesting experience and many people can feel effects in there body in specific places while the sound is being played and often it can correlate to that chakra.

It is however worth noting that Singing Bowls have been around a lot longer than out western musical scale. In India they correlate the 7 notes of the scale to different chakras than what we do.

Also certain notes can be sounded in high octaves. That means that even though you may have the note C, if it is in a high octave it is going to sound high pitched and you would not necessarily think that this would be the grounding sound that its meant to. Instead it may be activating more the higher chakras.

While working with the Chakras and Singing Bowls it important to keep an open mind. Pay attention to your body and how the sound makes you feel and let you inner feelings be your guide when playing and choosing a Singing Bowl. 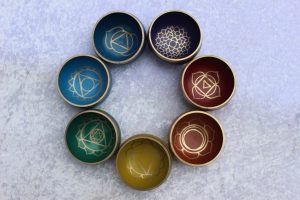